From the origins of the village 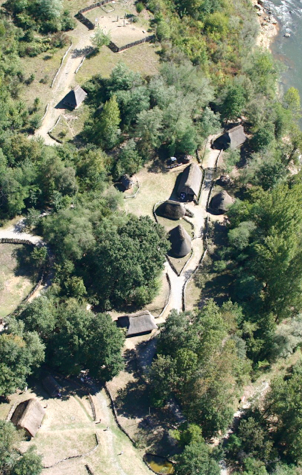 Eco-museum, archaeological park and cultural park, the Gallic Village is unclassifiable. Here, nothing is ordinary, everything is different and far from the usual signposted paths ; from the origin of the project to its construction, through the way it works to its opening to the public.

It's an extravagant human adventure in which a small team embarked upon, firstly with 2 people, then 5 on-site and finally 11 with the association committee. It's simply a team of friends who are linked together by the same passion.

They devised the construction of a Gallic village and the archaeological reconstitution of about twenty buildings, based on the latest research and scientific data.

These enthusiasts are still nicknamed "les Gaulois" (the Gauls), with a little less derision than ten years ago, have done everything. So these historians and researchers hold more than one office because they also became farmers, carpenters, thatch makers, masons, administrators and managers in order to bring this untenable project to a successful conclusion.

Alone for many years, with no means, vague promises and a piece of land provided by the SIVOM of Rieux, ten years later, the result is astounding.

Here people had very high expectations. As soon as you arrive, you'll be impressed by a gigantic moat, an embankment and a 200 metres long rampart that closes the village off. In the middle, a  monumental fortified door seals off the most exposed side of the village, the other sides being protected by a high cliff on the one hand and by the Garonne river on the other.

Inside the village covers 6 hectares. You can immediately see a huge building and further along barriers, ramparts, dwellings and a lot of linked paths to get lost for fun. It's a bubble, an alcove, a serene place imbued with mystery.

This place  - in Volvestre, half an hour from Toulouse (50 km) - was not chosen by chance. Indeed, several Gallic sites were discovered around this place. The tribe that occupied the Toulouse area and beyond is called the Volcae Tectosages.

This place is a genuine laboratory where the Human being is emphasised and if its touristic vocation is obvious, here the teacher, the scientist or the researcher will find plenty to think about. The Archeosite is a real resource centre and also organizes conferences, seminars, exhibitions and concerts. This reconstitution frees our imagination, forcing us to forget about modern comforts.... and maybe to fulfil our dreams ?

Trees are cut down in winter, three different species are chosen depending on their use. The felling respects lunar periods to preserve them from parasites.

The construction begins with strong posts driven into the ground ; they support the lower plates. Then comes the installation of posts supporting the ridge. The rafters link the ridge to the lower plate, pegged on the latter. The battens are fixed thanks to a plant link.

Thatch is a generic name which includes all the vegetable roofs. Concerning the Gallic Village, the preparation of the thatch begins in summer with the rye harvest. The latter is cut before maturity and dries in fields then it is stored in stacks. The preparation of the stacks is delicate: the straw is cleared by threshing, the stem is combed to remove the leaf, the short or broken straws are put aside.

It's better to put the thatch on in autumn. Stacks are fixed to the battens in successive rows, then freed from their links, they are spread by means of a pallet. The waterproofness in the summit is assured by some earth fixed by plants.

It's a mixture of earth and plant fibers, here cut straw in this case, that we throw by hand on a hazel tree wattling, in other words a tracery of horizontal branches which make up the walls of the house. When it dries, cracks caused by the retraction of the earth are filled, and the walls are sometimes coated with "earth so pure and so brilliant that imitates paint" as Tacitus wrote.